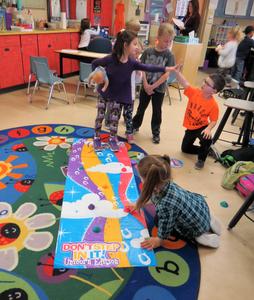 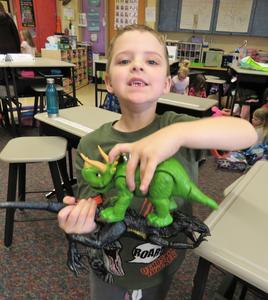 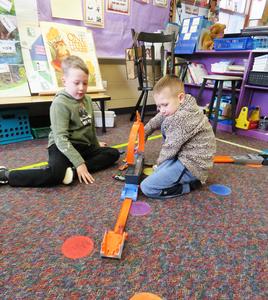 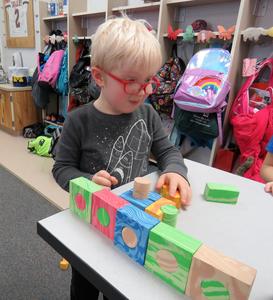 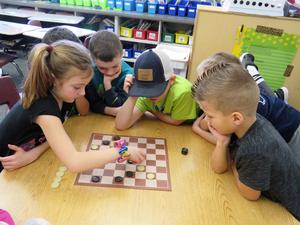 Cathy Leaf’s kindergarten classroom looked like a toy store explosion! There were toys and games everywhere and along with it – smiling, giggling and laughing students enjoying just being kids.

The scene was similar throughout all McFall Elementary classrooms Wednesday as the school participated in the annual Global School Play Day – a day set aside just for kids to play and spend the day using their own imagination and creativity.There was one big rule for the day – no electronics! No computers, no video games, no tablets or cell phones. Teachers even encouraged that the games and toys brought in not require batteries of any kind.

In one corner of Leaf’s room –two or three boys were racing Matchbox cars around a track. Others were playing with Play-Doh and putting together puzzles. Desks were aligned and covered with blankets to become forts where children played with stuffed animals inside. A group was working with plastic rods and connectors to build a house while others hop scotched their way through a maze of Unicorn poop (Play-Doh) in a fun game of Don’t’ Step In It.

There weren’t any math or writing assignments, but teachers say a lot of learning took place even if the students didn’t realize it all.

“Kids just don’t get enough play time. School is much more rigorous now than it used to be and there is so much going on all the time, they don’t have time to just play. This day gives them the opportunity to teach other and learn from each other. They build and practice their social skills,” said kindergarten teacher Cathy Leaf.

Students loved seeing how tall they could build pyramids made from paper cups and squealed with delight when they got to wreck it all and start again. They played cards and checkers and board games like Candy Land and Cat in the Hat. They guided their plastic airplanes and spaceships in a magical flight across the room.

Tables, desks and chairs became foundations for forts and empty cardboard boxes were transformed into homes for stuffed animals or furniture for dolls. Dinosaurs stomped and roared across the room and speeding cars raced around tracks and flew through corkscrew loops.

First grade teacher Karen Seifert said it was a good day for the students who practiced sharing and being respectful to others.  “They (the students) need to learn how to play together and not just use electronics. They need to learn to work together and solve their differences themselves,” said Seifert.

The first Global School Play Day was in February 2015 when more than 65,000 students participated. The number has increased every year. Researchers believe increases in childhood anxiety and depression may be a result of less time spent playing.  On the other hand, researchers also believe playing increases creativity, imagination and builds social skills.