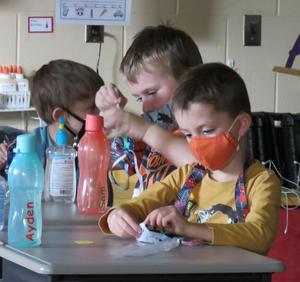 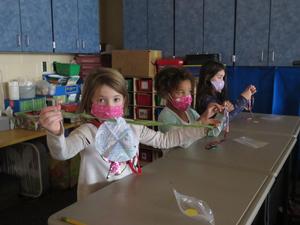 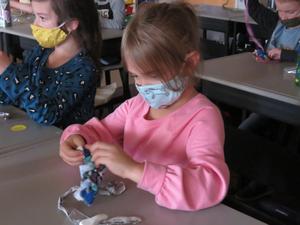 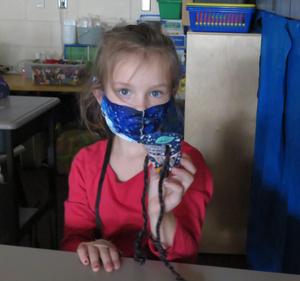 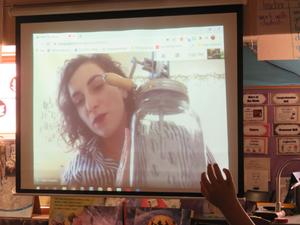 “Dad,” “Sister,” and “Pets” were among the treasures kindergarten students said they are thankful for this year. They wrote or drew pictures of things they are thankful for, then tucked the slip of paper with the precious words safely into their handmade Thankfulness Pouches. The small, cloth pouches were cinched tightly with a pull string to keep their treasures safe.

“These “Thankfulness Pouches” were used to carry the most valuable things people had back in the days of the first Thanksgiving,” said Katie Ponsetto, programming director of Historic Charlton Park. Via live streaming, Ponsetto walked the students in Cathy Leaf’s class through the simple steps of making their own Thankfulness Pouches with a circular piece of cloth and a bit of string laced around the outside edges.

Instead of actually collecting valuables to place inside the pouch, she invited students instead to write or draw a picture of something valuable to them. Those slips of paper were then cinched into the pouches for safe keeping.

Ponsetto also showed some of the historical pieces they have at Charlton Park that would have been used in the very earliest Thanksgiving gatherings. “Who can guess what they would have used this for?” she asked as she held up a large pot with a lid.

Ice cream, watermelon, and corn were all good guesses. Then Ponsetto told students it had nothing to do with the meal or food, but something that would probably come in handy afterward.  The guesses continued until Ponsetto’s additional clues finally led to the right answer – it was a chamber pot used as a portable toilet in those early days.

“And guess who had the chore of emptying it every day,” she said. “The kids!” That brought a lot of “ewwws” and “yucks” from the classroom as they agreed that would not be a chore they would want to do.

Ponsetto showed several other artifacts including an old iron that she explained was warmed up in the fire and then set upon the clothes to get the wrinkles out.  She demonstrated how a button hook helped with getting dressed for the special dinner, and a butter churn reminded students there were no grocery stores to go and get food for the celebration.

Students were reminded Thanksgiving is a time to be thankful. The class had already created their own long list of thankfulness on a wall in the room. They filled it with words like “Life, love, teachers, family, friends, animals, books and time to play.”